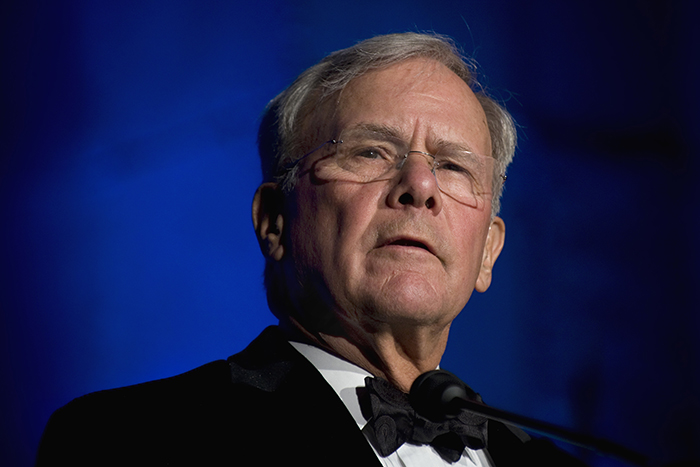 On Tuesday night, the NBC network announced that former news anchor Tom Brokaw is being treated for a form of bone cancer called multiple myeloma.

The 74-year-old iconic news anchor was diagnosed in August of 2013 at the Mayo Clinic, and has continued to work on NBC News projects while quietly undergoing treatment.

In the announcement, the network stated that “His doctors are optimistic about the outcome of the treatment he is receiving, and Brokaw said he remains ‘the luckiest guy I know.’

Brokaw began working at NBC News in 1966, moving to the co-anchor position in 1982, and taking over sole anchor position in 1983. He worked as anchor chair of the “NBC Nightly News” from 1982 through December 2004. Since his retirement from anchor chair, he has continued to work as a special correspondent for the network. His special assignments include a 2hr documentary on the assassination of JFK, appearances on ‘TODAY,’ ‘Nightly News with Brian Williams,’ ‘Meet the Press’ and MSNBC, and he is currently contributing to NBC’s coverage of the 2014 Winter Olympics in Sochi, Russia.

Tom Brokaw has been an NBC News icon, reporting on major world events for more than twenty years, including the Challenger disaster, the EDSA Revolution (Phillipine Revolution of 1986), the 1989 Loma Prieta earthquake, the fall of the Berlin wall and the September 11,2001 attacks.

What Is Multiple Myeloma?

Multiple Myeloma is a cancer that develops from abnormal or malignant plasma cells. Plasma cells are a type of white blood cell that produces antibodies, and they play an important role in our immune system response. Plasma is primarily formed in bone marrow, along with other white blood cells, red blood cells and platelets. Multiple myeloma is also referred to as a bone marrow disease or “bone cancer,” placing it in the same family as leukemia and lymphoma.

In multiple myeloma, the abnormal plasma cells multiply in bone marrow and interfere with the production of normal blood cells. Over time, excessive plasma cells release damaging levels of a certain protein (immunoglobulin) into the bones and blood. As the protein builds up in the body, it causes organ damage.

The cancerous plasma cells also cause pain and damage inside bones. In addition to crowding out normal blood cells, they release chemicals that tell the body to dissolve certain areas of bone. These weak and painful bone areas are called lytic lesions. As the disease progresses, excessive plasma cells spill out of the bone marrow and deposit in other areas of the body, causing further organ damage.

After non-Hodgkin lymphoma, multiple myeloma is the second most common cancer of the blood, bone marrow or lymph nodes in the U.S., representing 1% of all cancers.

Mulitple myeloma causes are currently unknown. The disease begins with few to no symptoms.  As it progresses, the accumulation of plasma cells in bones causes several symptoms, including:

The first signs of multiple myeloma are normally found through tests of blood and/or urine that come back as abnormal. Abnormal blood test results that suggest multiple myeloma may include: high protein levels in blood and urine combined with low albumin levels, high levels of blood calcium, anemia, and elevated creatinine (indicating impaired kidney function).

If you are concerned about symptoms of multiple myeloma in yourself or a loved one, please speak with your primary care physician or a health professional. To find a doctor in your area, visit: