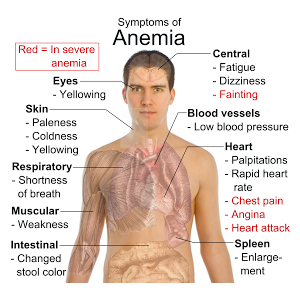 Anemia is the most common blood condition in the U.S, affecting approximately 3.5 million Americans.  With anemia, your blood does not have enough healthy red blood cells (hemoglobin) to bring sufficient oxygen throughout your body.  When the cells in your body don’t get enough oxygen, they fail to function properly. Symptoms of anemia — like fatigue — occur because organs aren’t getting what they need from our blood.

1.  Anemia caused by blood loss.  Chronic bleeding can cause anemia over time.  Some causes of blood loss anemia are gastrointestinal conditions such as ulcers, gastritis, hemorrhoids or cancer; and heavy menstruation or frequent childbirth in women.

2.  Anemia caused by decreased or faulty red blood cell production.  With this type of anemia, your body may produce too few blood cells, or the blood cells it does produce may not work as well as they should because of a lack of certain vitamins and minerals.  Some causes include sickle cell disorder, iron deficiency, vitamin deficiency, bone marrow or stem cell problems or other health conditions.

3.  Anemia caused by destruction of red blood cells.  With this type of anemia – also known as hemolytic anemia – red blood cells are fragile and do not survive normally in the stressful circulatory system, sometimes rupturing prematurely.  Some causes include sickle cell anemia, infections or other stressors, toxins from advanced liver or kidney disease, severe hypertension and other causes.

Anemia symptoms vary based on the type of anemia and its cause.  Some symptoms that are common to many types of anemia include:

In the early stages, our bodies are frequently able to compensate for anemia; if the anemia is still mild or has been developing over a long period of time, the symptoms may be very subtle.  If you are suffering from any of the above symptoms or have concerns about your anemia risk, please speak with your primary care physician.

To learn more about Anemia, visit WebMD, which provided source information for this article.  For more health information and useful tips, visit the Resources and Tools blog on TotalHomeCareSupplies.com.